There has been a huge amount of activity in Xander's room since we arrived. Currently, he has been in for 10 days - but it feels like 3 weeks. He has not been able to consume any food, we are relying 100% on TPN/Lipids to keep him "nourished." He continues to receive 64mg of Prednisone daily and has received 5 consecutive treatments of rATG. Based on his blood numbers, it looks like the lymphocyte population has decreased significantly. He has had three ECP treatments this week and today they are adding another steroid. The problem is that even though he isn't eating, he is still producing a significant amount of stool. Aaron says to think about it like a sunburn of the lower intestine. You can only imagine the irritation, inflammation and pain that he is having. He is on a constant dose of morphine, along with break-through pain button. This is making him a bit irritable (TO SAY THE LEAST).

But through all of this, he is still smiling! 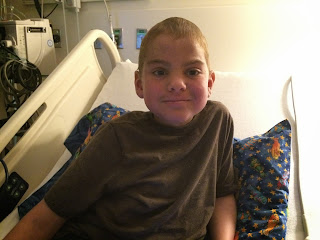 Yesterday, I bought him 10 more packs of gum, and he actually got excited about them! He says, "what else do I have to get excited about?" We don't talk about food at all in his room and have felt guilty about the last couple of meals that we have eaten.  For now, we all agree we ate "soup for dinner" if he asks :-(

He has been staying entertained with a very inappropriate video game and some other very appropriate items, like beeswax, yarn and lego. I was happy when he asked me to bring more yarn up to the room and to not forget the big box of beeswax too. As you might imagine, this "not able to eat" disease is overwhelming and getting his mind off of it is the number one goal. As of now, he hasn't made it very far on his homework, but he wants to keep working on it! 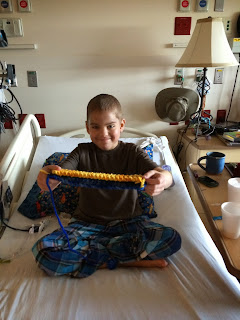 We have been blessed to have a lot of good energy and prayers coming his way... he is on so many prayer lists... these prayers and healing energy are making a huge difference. The barriers to healing are being lifted!

Thank you to Amy and Marcus for your guidance and meditation, Dr. Gibson for his gentle adjustments, Debbie for your ear points, and all of the Moms out there that are gifting milk to our boy. In an amazing turn of events, Dr. Connelly has fully supported and MADE IT POSSIBLE for Xander to get an official release from the hospital to start HBOT treatment tonight! Folks, I can't stress enough how absolutely life changing this is for Xander. HBOT allows the tissues to heal at an amazing pace. He has been out of treatment for a few weeks - he was really looking forward to it! Thank you to Dr. Connelly, Tami, Bruce and the Oxford Kids Foundation for this incredible opportunity.

There have been SO MANY of you that have helped us in so many ways - I'm sorry I can't list you all right now. We THANK YOU and are so grateful to have you in our lives!

Molly has been supported in so many ways also. She is absolutely loving first grade and is really starting to grow up a lot. Tonight the athletes visited the hospital and the 7th floor. Xander was getting an adjustment at the time and wasn't interested in meeting them, but Molly was! She got to speak with a group of them, and took a particular liking to Wes, who is on the Michigan Rowing Team (left side in picture). A lot of you know Molly loves to kayak, so this was pretty cool for her. It was getting late, so Molly and I started to head out to the elevators, and just so happened met up with some of the more well known players that were on the floor (not that Wes on the Rowing Team isn't well known...) When I walked up to the elevator, I knew right away who was there - Devin Gardner!! He had a yellow carnation flower in his jacket (obviously that some patient gave him) and started talking to Molly right away. We all got in the elevator together and Devin went on to tell Molly how beautiful her eyes were and asked her if he could have them (funny, she said no, because then she would be blind!) He was so sweet and gave Molly his carnation. What a fun way to end the day!

In the car on the way home, Molly told me that she was actually going to 'row' now when we go kayaking because she wants to be like Wes.