I am having a bit of difficulty setting the tone of this post, as there are some nice and lovely things that have happened over the past week, but Xander has still not turned the corner.

So, I guess it's better to start with the lovely things, rather than the not so lovely.

Xander has a very special surprise today from a group of friends from class. The experience started out a bit emotional for Xander, but ended on a very great note, including some fun in the gym on the 8th floor. Thank you to all that made the trip this afternoon, what a wonderful time to spend together.


Molly really enjoyed going to school today dressed up. Here is her awesome Rock Star look! She was a bit nervous about wearing the hair, but she kept it on until they had to change later in the day and she ended up loving it. 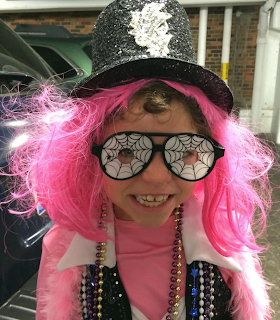 Xander's HBOT treatments have been going great. He gets disconnected nightly and we have a good routine going with the nurses. He continues to have ECP three times per week, usually early in the morning, so some of his nights have been very short. He is on so much Prednisone, he isn't take many naps and has been pretty wired. He is on day 17 without food. This is causing him serious mental distress. He breaks-down multiple times per day over this situation. Unfortunately, the bowel movements are just not stopping yet. I say yet, because I am optimistic that they will stop SOON. They have to, they just have to.

The new steroid that was added last week is called Budesonide, think of it like hydrocortisone cream for the bowel. This drug is extremely toxic if it gets into the blood stream, so they will check for levels periodically. His bowels have calmed down some since starting this, however, the dose was increased just yesterday to 3 times per day. Technically, Xander now has Chronic GVHD that is currently Acute Steroid Refractory GVHD. This basically means that he didn't respond to the steroid treatment and this is most likely going to be a problem for him for the rest of his life. (insert big sigh here).

Since he is not responding like he needs to be, we added yet another drug to the line up. It has only been used on 1 or 2 pediatric patients, and has been tested extensively on mice. It is a human protein called Alpha-1 Antitripsyn (naturally occurring in our body) and has been shown to significantly reduce inflammation with few side-effects (in mice). Of course, this has not been used in a setting exactly like Xander's, so we are keeping a close eye on potential side-effects. He has had one dose so far and I believe there are many more to come.

He continues to be on TPN and Lipids and is very skinny. He even commented on this tonight, and I believe that it is the skinniest he has been, ever. His pants fall off when he is on his walks. He walks approximately 1.5-2 miles per day around the 7th floor loop. Yes there was some bribing involved, but it is worth it. It keeps him up and moving and gives him focus. Unfortunately, practically every time he is out in the hallway, he smells food, popcorn, pizza, french fries and sees food in other rooms - it is very very difficult for him, but yet again, he made it through another day.

Having friends come by helps the time go by....  thank you to all who have reached out to help.

Sometimes, he actually gets along with Molly and they can spend a few nice hours together without arguing. 64mg of prednisone makes him pretty ugly sometimes, so here's a shout out to the best sister ever for putting up with Xander and all he can dish out. 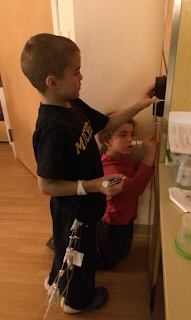 Please keep sending prayers and healing energy to Xander; he just has to turn the corner soon.

Peace and Love to all of Xander's Followers,