Foods on the menu

This starts the sixth week of admission. The walk to the car is getting longer and the camaraderie with the nurses grows, because this is the new normal. The life of having a sick child, the life of the sick child... Down the hall there is a lovely little lady, who is just about one year old. She has been in and out her whole life, each child on 7East has a different story to tell... I continue with the one I know the best.

Xander is continuing to progress out of GVHD IV+ of the GI tract. We believe that with his current output levels maintained for over 2 days, that he is considered GVHD I-II.

Xander will be following a low FODMAP diet (thank you to Dr. Murphy for your introduction to this) for as long as we can keep him on it. When at home, we will most likely have to store foods in a locked room for a while to help him resist the urge to eat other foods. This child does not have the decision making power that he needs to be successful on his own yet. He'll get there, but for now we have to eliminate the options. We are very careful about what we bring in the room, and keep items out of his reach that he can't eat. 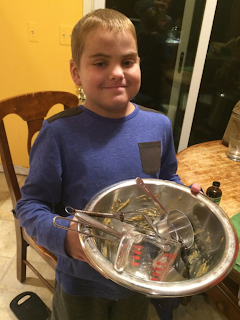 To compensate for his inability to eat, he has been watching the Food Network and has become a wanna-be chef! Tonight he told me he was now going to cook for us when he gets home (I can't wait!) but says he will not eat the food (for now).  Nurse Sara thought this was a great idea and I'm sure Kristin would also love to have him! He has really been wanting to cook, so the other day he had a bit of time to hit the kitchen! We had to be quick about it, but he made some scrumptious gluten-free banana walnut muffins that all of us enjoyed (he could not eat them and didn't). Way to go Xan! 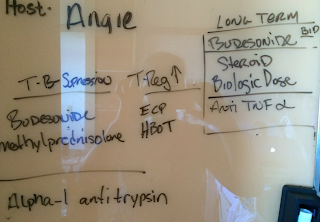 Xander's prednisone level has finally been significantly reduced - now down to 20mg per day. Last Monday, Aaron had a gut feeling that Xander was getting way too much steroid (metholprednisone and budesonide are the two he is receiving). The levels finally came back on Thursday (it takes 12 days to get the results) and indeed he was absorbing 50% of the budesonide into his blood stream. The number was so out of whack that the Doctor had to consult the pharmacist to interpret the data properly. Now he is on just 2 budesonide doses per day and the 20mg of Prednisone was a 50% cut. Aaron and I went head to head with the docs about this that Monday afternoon, practically yelling at them to reduce the steroid. He continued on 42mg for days until this data came back. Here is Aaron's overview of Xander's current therapies to control his GVHD.

It is very apparent that Xander wants to get out of the hospital. He is feeling so much better than when he came in. We have had a lot of time at the hospital and one of the things he has done this time is walked laps on the outside loop of 7 East. Each loop is about .07 miles, so he has logged 14 miles since he has been admitted! And to all of you parents out there... this did have some bribery built into it! 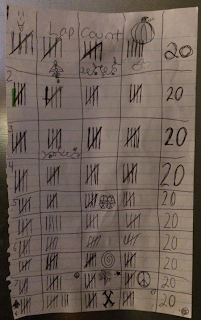 Xander has been the recipient of many lego sets and has enjoyed finishing them with all of us, especially including his Uncle Matt while he was home on leave. We all know that Matt loves lego, and once a lego fan, always a lego fan! Thanks for taking time out to visit with us Matt, we wish you all the best in Norfolk. 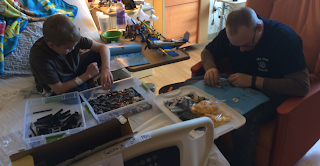 There are many people in Xander's life that bring him joy in lots of ways and Dr. Gibson is one of those people. Xander had such a big smile after his chiropractic treatment, I wish I would have taken a picture of that! He felt an overall sense of relief and comfort, it was just outstanding for him (and me too!) Thank you for the continued support Dr. Gibson! 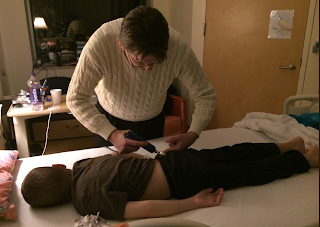 Thank you for all of your prayers and support during this struggle. We are praying to continue down this path of healing and to maintain long-term GI health.