Day +7 - Mmm, I'm gonna try with a little help from my friends

Day +7 post transplant had a bit of a rough start. Xander's need for transfusions has increased dramatically. The doctors have started checking his blood counts multiple times daily and transfusing him due to the extremely low levels. Yesterday morning, Xander's platelets were at 4 (thousand) and after receiving five units, bumped to 25 an hour later. Over the next 24 hours, the levels dropped back to 4. This does indicate that he is nearing or is in the lowest point of his transplant fondly called the basement.

Obviously, compared to the last time, Xander's ride down to the basement has been much smoother. Emilie and I have been working hard to keep Xander's body from unraveling. Mucositis was a big problem last year that led to much of his discomfort. Large doses of glutamine powder dissolved in yoghurt, coconut oil directly consumed, large supplemental doses of glutathione and multiple daily doses of omega fish oil and vitamin E are paying off in spades!!! Even though no one would ever choose this path, so far, it is WAY better than last time regarding his immediate health and comfort. 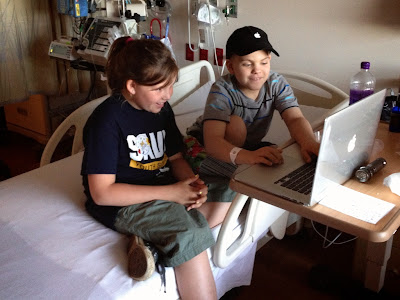 Xander has really enjoyed visits from his friends. Right before his classmate Elli and her father walked in, Xander was feeling a bit down. IMMEDIATELY upon hearing that Elli was here to visit (even before she opened the door) Xander was feeling no pain! As it turns out, Elli likes to play Minecraft, too. Xander enjoyed showing her the world he has been working on and Elli enjoyed visiting with Xander and seeing the Minecraft sites. As long as friends are super healthy, they are invited to spend time with Xander. Xander is looking forward to other friends visiting, too.

Schoolwork has enjoyed an increased focus here in room 21. We believe that it IS POSSIBLE to get Xander's immune system up to snuff for the first day of school in September. The doctors say that it is unlikely that he will be "fully baked" by this time but they would like to see him do it, too. Emilie, Molly and I are all commited to getting him healthy and his immune system reconstituted ASAP. We have contacted Dr. Powell at Oxford Hyperbaric Center and she is prepared to treat Xander whenever the docs allow it. Dr. Connelly (primary BMT physician) said that Xan could start HBOT as soon as his white blood cells are over 500 and upward trendin - currently his white blood cells are undetectable.

One more thing - Xander received a REALLY AWESOME and SPECIAL gift from EVERYONE that has contributed to his cause. You all are responsible as Emilie and I would not have been able on our own to provide such a gift for a ten year old.

This past Saturday, Xander was saddened that, for multiple reasons, he was unable to play Minecraft with Evan over the Internet. This situation was much to do with not having an antiquate computer available. Funded 100% by you - we were able to purchase Xander a new MacBook Pro on Saturday. This has been a game changer. When I say game changer, I mean it - we could not have chosen better timing.

Emilie and I have used the computer that Xander loves as our biggest ever lever ever. We are really nice about it, but we have been able to motivate Xander to take medication, take walks, clean up his body, get up and brush his teeth, and about anything he needs to be doing with this very powerful lever. Breaching the subject of schoolwork has previously brought us a battle of willpower - BUT NO MORE!!! After I loaded Rosetta Stone German on his computer his butt got motivated and Xander has even started doing lessons without being asked - THANK G-D and thank you to everyone who made this possible.