We have had some long days and some long nights since Xander's radiation treatment. The first two days after the radiation went fine, then it all started to hit him - no white blood cells, no way to fight off infection. He was moved back over to IV meds and put back on TPN/Lipids. He remains on them now.

He had a CT scan on Tuesday and it showed that he has something growing in his lung. This is not cancer, most likely it is a fungus or bacteria. Today, May 3rd he will undergo a procedure where they get a sample of the "stuf" in the lung. He will be sedated for this, it will last about 20-30 minutes. He is a bit anxious about wearing a mask to go under, but he is a good communicator and will tell us what he is feeling and every single doctor here wants to make him comfortable. We will have the results of the tests in about 24 hours, but there are also additional tests that will be run on the samples that could take up to 2 weeks to come back. If it is a fungus, then he will go on a fungal medicine.

On a positive note, he has had his first (on-site) Reiki treatment and looks forward to the next.

He doesn't really have an appetite, but yesterday he did eat rice, seaweed and soy sauce. We joked about having REAL sushi, maybe someday soon.

We got out last night (unhooked from pole) and took a nice walk... his knees bother him a bit, but hopefully with some massage and lotion, those symptoms will go away.

We don't have cell counts yet.. grow cells, grow!

Thank you for all of your love and prayers and support. 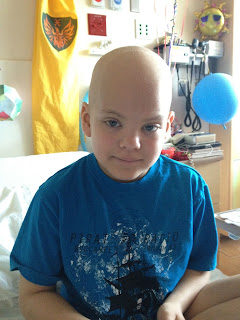 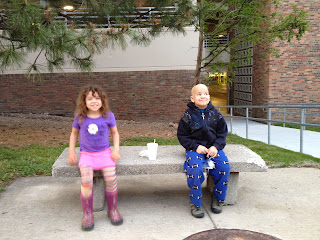 Out for a walk in the warm weather.... with his favorite sister