Best 9th Birthday of all time

We began Xander's Birthday celebrations on Tuesday, April 24th, the day of his cord transplant. All week he has been receiving cards and gifts in the mail to celebrate his Birthday. This has really helped take his mind off of how he has been feeling the past 48 hours (writing this on Sun Apr 29). Your love and outpouring of support is really helping Xander very much. Thank you to everyone that has sent cards and gifts, I hope to some day send you a thank you note (but please forgive us if we don't).

It is my duty to report about the best 9th Birthday of all time. I would have to say, that this was the most well thought out and special day of Xander's entire 9 years. I do believe that if we could have given out awards for the best birthday ever, they would go to the parents of RSSAA.

Part 1: 10am: Plane arrives from the South side of hospital carrying a banner celebrating Xander's Birthday, it circled the hospital 8 times! The banner read:

Xander was able to see this from his bed, which was very great, since he isn't feeling so well right now.
Here is a picture from the hospital window. Margo informed us that this was a gift from "the world!" Thank you, world! Dr. Yanik informed us that in all of his 20 years of doing this, he has never seen any Birthday present as cool as this! (happened to be the most perfect timing because it was right during his rounds). 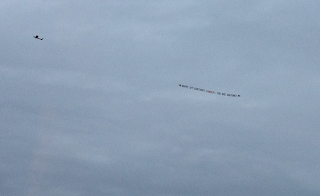 Part 2: All Day: We have to get Xander well enough to be able to make Part 3 at 6pm. We had to help him work through a high fever over night and into this special day. He is a truly amazing child. The radiation wreaked havoc on his insides, so he is vomiting and not eating. He is back on all IV meds, meaning the his pole is filled with pumps, and his electrolyte levels are watched constantly. He is doing okay, but needs lots of prayers right now. Last night, around 5pm, he got a little pep talk from his parents and Crissy (our nurse) and was finally informed what was going to happen at 6pm in honor of his Birthday (before this, it was a surprise) - as if the plane was not enough... This inspired him to get unhooked from the pole (thank you Crissy for your outstanding nursing skills and care during this time) and he walked all the way down to the other end of the 7 East hallway so that we had a better view of the P2 parking structure. What started out as a cloudy day, now begins to get brighter.

Many of Xander's classmates, school buddies, friends and family met on the top of the UofM P2 parking structure. They gathered, passed out balloons (with tags attached to send back to us if / when they are found), and coordinated their approach. Then the crowd moved to the side of the parking structure closer to the building, they could then see us waving through the 7th floor window, as we shined a flashlight down on them so it was easy to see where we were looking out from that huge hospital building.  They rolled out a large Happy Birthday Xander banner and sang Happy Birthday to him (you should be able to hear this on the video). We called down to Aunt Lucy's phone, and put the crowd on speaker. It was a beautiful outpouring of love energy - it was absolutely beautiful! The sun even came out right as the balloons were going around the edge of the building. Kudos to the planning committee and the parents (and faculty) of RSSAA. 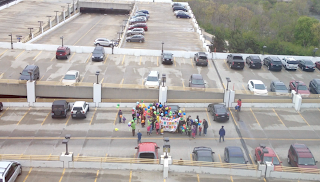 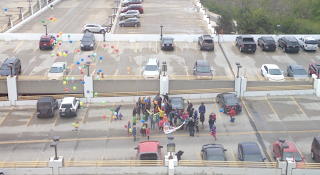 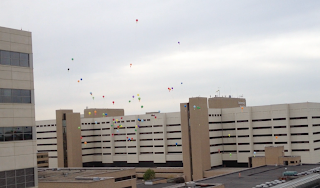 We now headed back to the room to get ready for Part 4.

**
I know that for each person, including Xander, this experience had different meanings. This is only an overview too, as someday I may need to write a book to explain everything that our family has gone through during this time. Xander is doing the absolute best job any child in his position can do, we know that. He is doing everything in his power to grow new cells, to become healthy again. The energy we received tonight will keep us headed in these positive, uplifting directions, and will help us keep going strong. As our friend Lisa stated it: "Elizabeth, your 24-mile-run-brainstorm-turned-reality was breathtaking and magical!"
**
Part 4: Meet in the Peony Garden


Greeted and welcomed by Great Lakes Taiko Drummers, we all entered the garden with grace. Xander even walked for a portion of the journey down from his room. With complete love and understanding, the entire group wore masks, so as not to expose Xander to any germs. Ms. Tucker then stood on the hill and told her very own Story of the Phoenix, bringing all different beliefs represented in this story, together. As the story goes on, the Phoenix returns the egg to the City of the Sun... all this time, the sun comes out, shining over the peony garden as Ms. Tucker was telling the story. It was magical. Mr. Banks then led us in the song of light, as a round too!

We paused for a couple of moments to turn to the hill when the Japanese Drummers began to play again. Then the puppeteer began the flight of the phoenix, across the lands, while the drums kept the beat. As the phoenix reaches the nest, the rest of the journey will begin.

The Detroit Fire Guild danced with balls of fire and did dances with hoops of fire, representing the time during which the new Phoenix is born. The dancer was very talented and made the show very exciting for all of the viewers! She then put out the fire with her mouth. Her energy transitioned into Silk Fire, played very nicely by the puppeteer, and the new phoenix then rising out. Played by a great family friend, the new phoenix flyer did an excellent job, finishing the performance by giving the new phoenix (kite) to Xander.

I don't think words can explain this experience. I don't think the pictures capture it all, either. But, I wanted to share as much with you as I could. 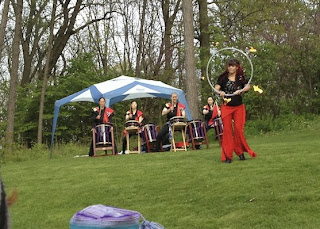 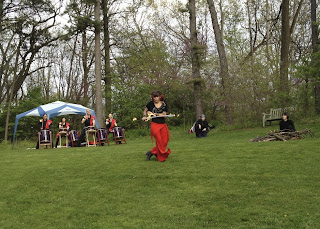 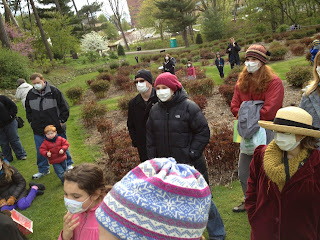 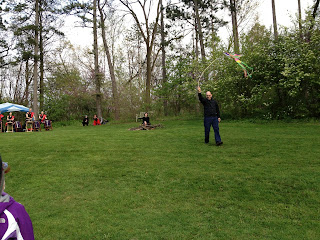 Much needed rest for all of the Salsitz Family, then on to Part 6!

Greeted early this morning by the UM Survival Flight crew, this turned out to be an extra exciting day for Xander too! If we didn't think it could get much more exciting, it did!

This afternoon, Xander, Evan and Michael (along with Molly, Dianne, Ellen, Aaron and Emilie) all were invited down to see the Survival Flight Helicopter office, training area, went into the tunnel under the road, and out onto the pad. Oh my, this was SO AWESOME! (side note, when this chopper lands on the top of Mott, I get up out of my chair to watch, every time ;)

Wilson, our guide, is a great guy. He takes us down the elevators, into the office, explains that UofM crew members have won the wold championships in Prague for being the best survival flight team in the world! They started in 1983.

I would have to say that as a 9 year old, this has to be one of the coolest things on the planet!

Xander was given the extra-special treatment and was allowed to put on the helmet, and the pilot even powered up the computer, radios, screens and entire dashboard for Xander to see. Xander quickly informed them that he wanted to take it up for a spin, as he knows how to fly the chopper (note: from X-Plane on his iPad) and is fully qualified. He can even land the Space Shuttle. (hehe) 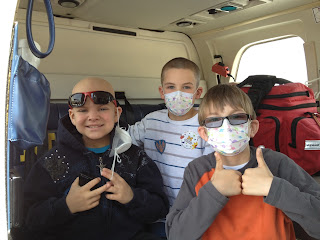 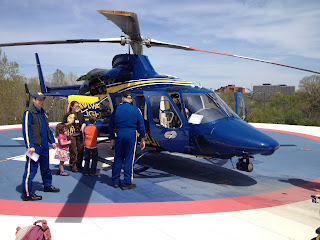 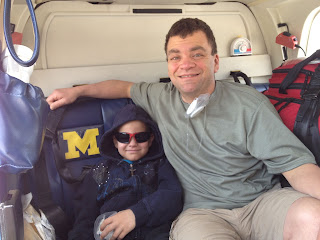 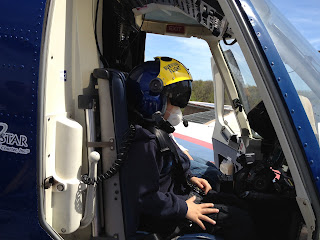 We hope and pray as the days go on that Xander can get his strength back. He seems to have cut the fever way down and it seems to be staying down at this point. We'll need to get him eating again.