Little bone marrow stem cells have officially been given their Certificate of Occupancy by Dr. Craig. Xander DID NOT need either red blood cells nor platelets this morning. All blood counts are up or the same, meaning that his new bone marrow stem cells are meeting or exceeding the need filled by natural cell loss. In addition, the past couple of days have seen a lessening of his GVHD (controlled) related skin rash. He still won't eat very much, so a few more days of I.V. nutrition while we work on intake levels.

Here is a video from a few days ago (March 27). This is from his 8 sausage 3 slice of french toast day!


Here's an awesome card that Gabe, an employee at Zingerman's wrote for Xander - sent along with soup from friends who's daughter works for Zingerman's, too. 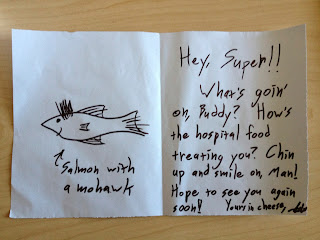 Funny (or not so funny), Xander has had a slew of student nurses assisting in his care - he tests their skills and quizzes them on the functionality of the Omni 4000 pump or holds his breath to make his blood pressure skyrocket. He always gets a laugh and thankfully, thus far, he has not done this during inappropriate times. Also, Xander has decided that he wants to do his own subcutaneous Neupogen shots - the nurses always do this that or the other that makes it hurt so… well you get the idea. Xander is raising the bar on self-help for eight year old kids.

Peace and lots of love to all of our supporters and followers,