Today was the first day of rATG. The dose was started at 1000 and will finish running at 1900 - 30 minutes from now. This morning went okay but he has been feeling worse and worse since noon. This is par and is very expected. After a couple of bouts of puking like an old sailor this afternoon, his fever went up to 104.1 and has been up for an hour. They are going to do a chest x-ray after culturing all three ports for aerobic and anaerobic bacteria. My son, like me loves water and has been begging to take a hot shower. As soon as they unhoo Just realized that they aren't going to unhook him as they are also starting cefapime, at least until the cultures come back. Finally, the kinetics came back and the busulfan was not active enough so the next two days dose will be increased by 90%!

The picture is of Xander feeling pooky, but not too bad. The nurse is Tracy and she is AWESOME! 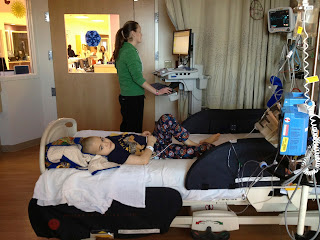